STOCKHOLM (Reuters) - Scientists from Britain and Japan shared a Nobel Prize on Monday for the discovery that adult cells can be transformed back into embryo-like stem cells that may one day regrow tissue in damaged brains, hearts or other organs.
John Gurdon, 79, of the Gurdon Institute in Cambridge, Britain and Shinya Yamanaka, 50, of Kyoto University in Japan, discovered ways to create tissue that would act like embryonic cells, without the need to collect the cells from embryos.

They share the $1.2 million Nobel Prize for Medicine, for work Gurdon began 50 years ago and Yamanaka capped with a 2006 experiment that transformed the field of "regenerative medicine" - the search for ways to cure disease by growing healthy tissue.

"These groundbreaking discoveries have completely changed our view of the development and specialization of cells," the Nobel Assembly at Stockholm's Karolinska Institute said.

All of the body starts as stem cells, before developing into tissue like skin, blood, nerves, muscle and bone. The big hope is that stem cells can grow to replace damaged tissue in cases from spinal cord injuries to Parkinson's disease.

Scientists once thought it was impossible to turn adult tissue back into stem cells. That meant new stem cells could only be created by taking them from embryos, which raised ethical objections that led to research bans in some countries.

As far back as 1962 Gurdon became the first scientist to clone an animal, making a healthy tadpole from the egg of a frog with DNA from another tadpole's intestinal cell. That showed that developed cells carry the information to make every cell in the body - decades before other scientists made world headlines by cloning the first mammal from adult DNA, Dolly the sheep.

More than 40 years later, Yamanaka produced mouse stem cells from adult mouse skin cells by inserting a small number of genes. His breakthrough effectively showed that the development that takes place in adult tissue could be reversed, turning adult tissue back into cells that behave like embryos.

Stem cells created from adult tissue are known as "induced pluripotency stem cells", or iPS cells. Because patients may one day be treated with stem cells from their own tissue, their bodies might be less likely to reject them.

"The eventual aim is to provide replacement cells of all kinds," Gurdon's institute explains on its website.

"We would like to be able to find a way of obtaining spare heart or brain cells from skin or blood cells. The important point is that the replacement cells need to be from the same individual, to avoid problems of rejection and hence of the need for immunosuppression."

In just six years, Yamanaka's paper has already been cited more than 4,000 times in other scientists' work.

In a news conference in Japan, he thanked his team of young researchers: "My joy is very great. But I feel a grave sense of responsibility as well."

Gurdon spoke of his own unlikely career as a young man who loved science but was steered away from it at school, only to take it up again at university.

He still keeps an old school report in a frame on his desk: "I believe he has ideas about becoming a scientist... This is quite ridiculous," his teacher wrote. "It would be a sheer waste of time, both on his part and of those who have to teach him."

The science of iPS cells is still in early stages. Among concerns is the fear that implanted cells could grow out of control and develop into tumors.

Some scientists say stem cells from embryos may prove more useful against disease than iPS cells, and the ethics of working with embryos should be defended.

Nevertheless, since Yamanaka published his findings the discoveries have already produced advances. The techniques are being used to grow cells in laboratories to study disease, the chairman of the awards committee, Urban Lendahl, told Reuters.

"You can't take out a large part of the heart or the brain or so to study this, but now you can take a cell from, for example, the skin of the patient, reprogramme it, return it to a pluripotent state, and then grow it in a laboratory," he said.

"The second thing is for further ahead. If you can grow different cell types from a cell from a human, you might - in theory for now but in future hopefully - be able to return cells where cells have been lost."

Thomas Perlmann, Nobel Committee member and professor of Molecular Development Biology at the Karolinska Institute said: "Thanks to these two scientists, we know now that development is not strictly a one-way street."

"There is lot of promise and excitement, and difficult disorders such as neurodegenerative disorders, like perhaps Alzheimer's and, more likely, Parkinson's disease, are very interesting targets."

For now, both men said their scientific work continues.

Asked why he still keeps his schoolteacher's discouraging report, Gurdon said: "When you're having problems, like when an experiment doesn't work - which often happens - it's nice to remind yourself that perhaps after all you're not so good at this job and the schoolmaster may have been right."

Please join us on Friday, November 2nd to cheer on the Allen Americans vs Tulsa Oilers! A portion of the tickets will benefit the Mary Kay Foundation! 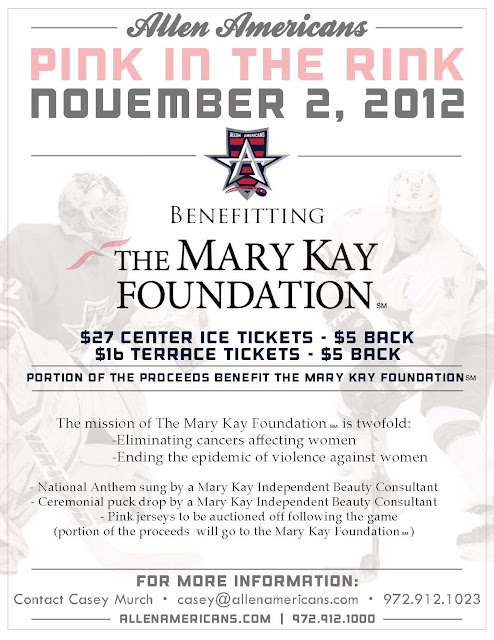